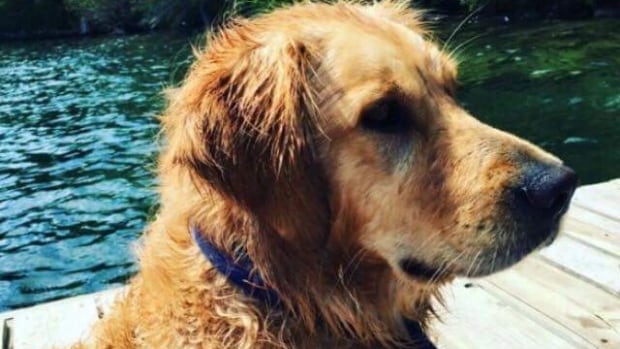 Hailey was killed in September 2017 after being attacked by another dog in Little Mountain Park, an off-leash area in the northwest outskirts of Winnipeg. (Submitted)

The Rural Municipality of Rosser, just northwest of Winnipeg, is investigating after a dog was killed by another dog at Little Mountain Park, in the northwest outskirts of the city, late last month.

Rachael Jennings said her golden retriever, Hailey, was walking in the park on Aug. 29 at about 6:30 p.m. with family members. While there, another dog, described as a German shepherd named Allie, charged Hailey on one of the park's trails and attacked the golden retriever, Jennings said. The park is an off-leash area, and neither dog was wearing a leash at the time of the attack.

Hailey took a few steps into the bushes and then died, said Jennings.

Witness Darlene Korzinksi saw the attack and described it as unprovoked.

Allie lunged for Hailey, who immediately rolled over on her back in submission, Korzinski said. The German shepherd bit Hailey on the throat and wouldn't let go.

"It happened so fast and you never think it's going to be a really bad situation," said Korzinski. "This dog was on a little mission. It wasn't like a little scrap and you break it up. Allie's owner couldn't peel her off, couldn't get her off the dog." 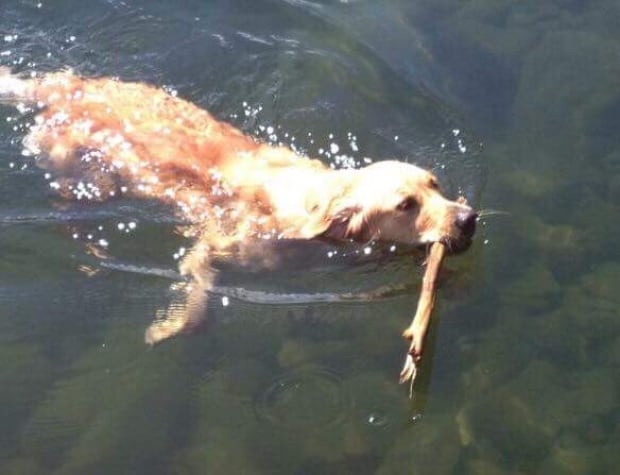 Hailey was about five years old and in good health, say her owners. (Submitted)

Korzinski said family members tried to save Hailey, and she tried to revive the dog through CPR but was unsuccessful.

"I tried, I couldn't tell you how many minutes," she said.

Korzinski said after family had left with Hailey's body, she confronted Allie's owner, who has not yet been identified.

The owner then went back into the park to let his dog run around, she said. "I was blown away, to be honest."

Warning to other dog owners

Hailey was five years old and in good health, said Jennings. She said her children were devastated by the dog's death, describing them as "absolutely hysterical" after Hailey died.

A vet told Korzinski that Hailey's trachea may have been crushed or the bite may have caused an aneurysm.

Korzinksi, who is a member of the Little Mountain Park Pet Owners Association, said she printed up a poster warning owners about the incident. The poster has been put up in other area parks and it has been shared by several dog groups on Facebook.

Korzinksi said she has seen Allie and her owner at the park since the incident.

Jennings said Allie's owner has tried to call her to apologize, but said she doesn't have the strength to talk to him.

"Two wrongs don't make a right," she said. "I'm not out for blood here, I'm not out for vengeance … I just think he needs to take responsibility as a pet owner" and leash and muzzle his dog while Allie is around others.

Korzinski said she'd like to see it taken a step further.

"I want him to be punished. I don't want that dog to be allowed in any public place, where there's people, there's kids, there's other dogs … and I think his dog should be deemed a dangerous dog and have a special permit for it, if he's allowed to keep it."

The park is within Winnipeg's Perimeter Highway, but is technically located in the Rural Municipality of Rosser, so an investigation is the responsibility of the municipality, a city spokesperson said.

"Since Little Mountain Park is in the RM of Rosser and is outside of city limits, our bylaws do not apply so we are not able to conduct an investigation or take action in this case," the spokesperson said in an email to CBC.

"We never like to see something like this tragedy occur and we want a thorough investigation to take place with appropriate outcomes, so we have referred this incident over to the RM of Rosser for their handling."

RM of Rosser CAO Larry Wandowich said the municipality is investigating and will take appropriate action.

RM staff are not aware of any other dog deaths that have ever happened in Little Mountain Park, he added.